We start our walk looking into a rather uninspiring void that is the city council carpark on Mill Street. But transport yourself back almost 200 years to the late middle 1820s: George IV is on the throne, Florence Nightingale is but a toddler, and the first fossil ever to be recognised as that of a dinosaur has just been discovered. A row of houses is in the process of being built in this space, representing the best of people, the best of communities looking out for each other and those suffering hardship, because the row of houses being built are almshouses. They are being built by the Warden and Society of Sutton Coldfield, the administrative body that ran the town at the time “for the reception of the reduced and meritorious inhabitants” of the town. The building of these almshouses was funded by selling felled trees from Sutton Park.

Each almshouse consisted of two room on the ground floor, with a cellar below. To gain residence, you had to be “elected” by the town’s governing body and then in addition to a home, you received a weekly grant, plus an annual coal allowance. When a vacancy occurred, notices were posted on the doors of the parish church and the Town Hall.

Moving on, let’s pause a moment stood at the North side of the Northern end of Lower Parade, looking towards Victoria Road. This view takes in several lost buildings. If we’d been stood here in the 1870s, we’d have seen the Dog Inn, later rebuilt (in the late 1920s) retaining the same name but most recently known as Rosies (now another a “lost building”).

Just behind the Dog Inn was the plot where the first Baptist Church in this part of Sutton was built (it now occupies the former school building on the other side of Victoria Road). This original building was formally open in 1913 and could accommodate 300 people.

The building of the Baptist church can be seen as part of the development of Victoria Road. Victoria Road had started to be laid out in 1886. The first houses built were a short row of semi-detached villas next to the school on the north side.

By 1894 houses lined the south side of the road (where the multi-story car park now is), but the north side remained largely given over to allotment gardens, until development in the 1920s.

From the bend in Victoria Road we walk down to join South Parade, and turn left to walk towards Plantsbrook school. Pause a moment outside Sutton Arts Theatre [PIN: Baths in Slippers]. This building was originally a public baths – not a swimming pool, but a place where you could go and have a wash in a bath tub (at this time lots of homes didn’t have bathrooms like we do today). It was built by the Town Council in the late 1920s, following the donation of the land by Mr James Parsons, a pawnbroker and the then resident of Holland House – a large house which no longer exists other than in the name of nearby roads and the local infant school.

For a small fee people could use the baths, and were provided with a towel and soap to do so. The baths continued until sometime around the start of the Second World War but gradually fell into disrepair. Eventually in 1951 the Sutton Arts Theatre took over the building.

Continuing down South Parade you need now to imagine something rather more scenic than a council car park; this area used to be an open field running down to a pool, with an island in the middle, fed by a brook from Sutton Park. Not so much a lost building, but definitely a lost landscape. The edges of the pool lapped over the far side of the carpark, and much of what is now Homehall House would have been in the middle of the pool back at the start of the 20th century.

Now here’s a question – what do you call the stream that runs through this area? Ebrook? Plantsbrook? Both of these?

Ebrook was the name that was historically used for this stream (though it should be noted that actually much of this area of Sutton was marshy and wet until well into the 20th century, and the water courses were more complex than they are now), but at some point the name Plantsbrook was adopted by local authorities, “Plant” being the name of a mill owner, lower downstream.

Could the wet and marshy landscape be the reason for the name of our next lost building on our walk, Holland House? 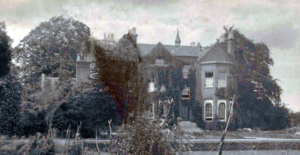 If you stand at the south end of South Parade you now see before you the very recently rebuilt Plantsbrook School. This site has seen lots of changes over the past 250 years or more, starting with it being used for a gun barrel boring mill in the 18th and 19th century, owned first by the Oughton family, and later by the Jerome family and finally the Parsons family (who provided the land for the baths in South Parade).

Holland House (a building separate to the mill – which will hopefully feature in another lost buildings walk in the future) was probably built around 1760; it is first mentioned in a document dated 1763. By the mid 19th century it was a large home (with not only a “best” but also a “second” kitchen, and “five large attics”), and at all points in its history the families who lived there played considerable roles in the life of the town.

The 20th century, however, saw a decline in the fortunes of Holland House, and in the 1930s it was demolished to make way for the building of the Riland Bedford High School, the forerunner to today’s Plantsbrook School.

Let’s now follow Upper Holland Road back up the hill towards The Kings Arms. Whilst there has been a building on this site since at last 1763, the building you can see today was built in the mid 1930s, around the time that Holland House disappeared and the Riland Bedford school buildings were going up; for local inhabitants during this period they would have witnessed a lot of change, as it was also in the late 1930s that the council houses on Ebrook and Jerome Road were built.

Heading up Coleshill Street we’ll pause at the right hand turn into what is currently a wasteland. This empty plot of land, currently earmarked for development into retirement flats and sheltered accommodation, was once a very busy light industrial site. The first development on this site was the Tudor Laundry which was built between 1904 and 1913.

Later the site was occupied by the Royal Works (brass pressings) which was bought by Mr Derricott in the late 1950s/early 60s. During the Second World War, the buildings were used briefly as a munitions factory.

Moving on up Coleshill Street, pause at at the zebra crossing and first look across the road to the block of flats with the rather strange, undulating brickwork around the base. A beautiful building use to exist on this site – and one that played a very important role in the town: The Provident Dispensary. This provided medical support to those families in the town who were neither rich enough to afford private medical care, nor so poor that they received medical care from the parish doctor.

According to the Medical Officer’s Report on the Health of the Borough of Sutton Coldfield in 1897 , the year in which the plans for building the Dispensary were put in motion, at that point Sutton’s population was estimated to be 11,641 (compared to c. the 95,000 inhabitants it currently has). The birth rate was 19.15 per 1000 (in 2019 the UK-wide average birthrate was 11.1 per 1000). 10 births were registered as illegitimate in 1897 in Sutton Coldfield and the medical officer, Mr Bostock Hill, writes “I regret to to state this is the largest number of illegitimate births I have ever recorded in a year.”

Of the 126 deaths recorded in the borough in 1897, 22 of the deaths were of children under 1, although this actually represented a considerably fall in infant mortality rates of recent years.

In discussing cases of infections diseases in the town, including 2 cases of typhoid fever, the medical officers records that “Thirty loads of Bedding and Clothing were sent to the Aston Manor Disinfecting Station.”