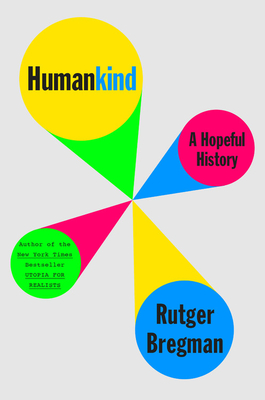 2020 isn’t proving to be an easy time to remain optimistic. But if you’re looking for something that might help you feel hopeful, Humankind by Rutger Bregman, part philosophy book, part call to arms, is a stimulating and easy-to-read place to start.

To paraphrase Bregman, these might be the most challenging words you read this year:

“Most people, deep down, are pretty decent”.

With the Cummingses and Trumps of this world filling the headlines recently, it might be hard to believe that statement, but what Bregman’s book does is walk you through lots of stories and arguments to try convince you that yes, human beings are indeed fundamentally good. Not only that, if we were to wholesale start acting if we believed in our species’ essential goodness, the world could be transformed in a truly exciting, beneficial, enriching way.

Wide-ranging stories -from a real-life case echoing the Lord of the Flies basic plot line, to the puzzle of the statues on Easter Island, via gene research done on domesticating foxes and the infamous and terrifying psychological experiments carried out by Milgram and Zimbardo – form Bregman’s canvas for exploring the varied arguments in favour and against the claim that is widely made (including by many religions); that we’re born bad.

And it’s a challenging read.

“Belief in human kind’s sinful nature also provides a tidy explanation for the existence of evil. When confronted with hatred of selfishness you can tell yourself, ‘oh well, that’ just human nature’. But if you believe that people are essentially good, you have to question why evil exists at all. It implies that engagement and resistance are worthwhile, and it imposes an obligation to act.” (my emphasis)

To inspire us, Bregman then goes on to explore a number of ways around the world a different, more positive, constructive approach has been taken, whether that is the participatory democracy seen in the Venezuelan principality of Torres, the Norwegian prison system where inmates are treated as people not monsters, or the story of how South African avoided all out civil war in the months leading up to the inauguration of Mandela as the first President following the Apartheid era.

It’s an encouraging and exhilarating read.

I’ve a t-shirt which says “Read books: Complicate your point of view”. This is certainly a book to do that. Whilst much of what Bregman convincingly argues for is exciting and uplifting, at times things pop up that worry me. If you’re an introvert, Bregman’s argument that sociable people are smarter won’t sit well. If you believe changing human behaviour is a key plank to mitigating climate catastrophe, you’ll be frustrated by his rather glib faith in our ability to invent our way out of the environmental disaster we are facing. He also makes an argument for empathy being a bad thing…

You may believe that it’s unrealistic or idealistic to believe that people are fundamentally kind and good, but I for one, want to believe Bregman’s arguments. Bregman’s proposal that we fundamentally restructure how we act, either as individuals, groups, organisations or countries, so that at all stages we are informed by a belief in better, in goodness, and in hope is one to make you feel optimistic even in these hard times.

[Reviewed by Zoe for FOLIO]