Fun Palaces is an annual weekend of action – arts, science, craft, tech, digital, heritage and sports events and activities – run by and for local communities. As we can’t get together in person this year FOLIO Sutton Coldfield is instead sharing a local 220 year old recipe for………..

…in the hope that you might bake them and share them with a neighbour, learn a little bit about local history, feel a little bit curious and perhaps even share with us one of your own family recipes.

So grab your apron and mixing bowl and get ready to recreate a little bit of local history in your own kitchen! 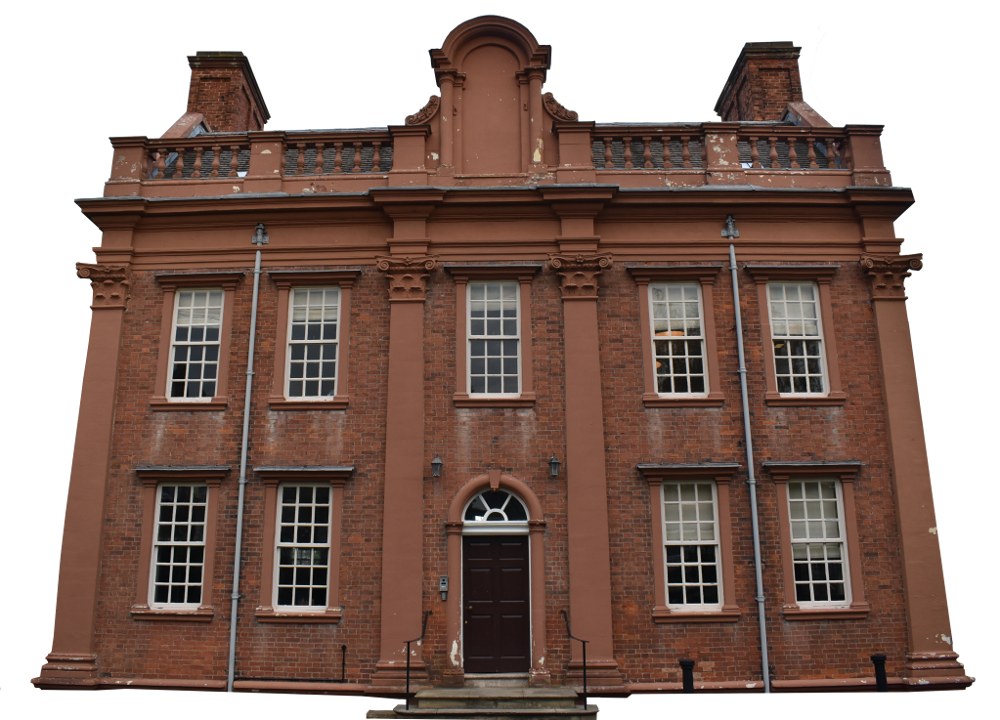 Do you recognise the building? It looks a little like the original Fun Palace but actually it’s called the Moat House and is on the Lichfield Road, opposite the Police Station and next to the BMet College in Sutton Coldfield.

On March 22nd 1791, Eliza Duncumb, resident of the Moat House, wrote her first entry in what was to become a collection of recipes she no doubt enjoyed or found useful. Some of the recipes were for medicinal “cures” whilst others were for dishes as varied as Hare Pie, Almond Pudding and Damson Wine.

Somehow Eliza’s recipe book ended up in New York, where it is now part of the collection of the library at the New York Academy of Medicine. The librarian there generously shared images of some of the handwritten recipes with Janet Jordan, a member of the Sutton Coldfield Local History Research Group. Janet has transcribed these recipes, including one for “Ginger Cakes”.

Ginger Cakes
1 oz: of Ginger, 3 quarters of a pound of sugar, 1 pound of flower, half a pound of butter,
rub the flower & butter together, then put the sugar & ginger in, & wet it with cold water
to a stiff past, & roll it out very thin –

Thank you to the New York Academy of Medicine Library for granting us permission to reproduce the image from Eliza’s recipe book and to Janet Jordan for permission to share her transcription. To read more of Eliza’s recipes, and learn about who she was, and why the recipe says “Mrs Hunt” on it, click here read Janet’s full article on the Sutton Coldfield Local History Research Group’s website.

Now it’s over to you…Join in our Fun Palace by trying out this recipe yourself, letting us know how you get on and what you think this wonderful snippet of local history tastes like! 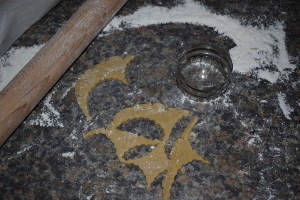 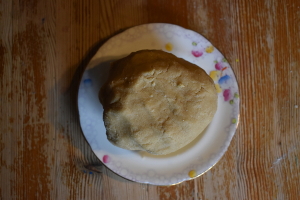 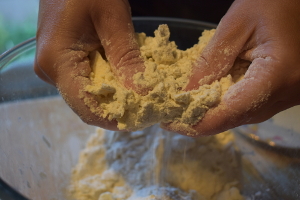 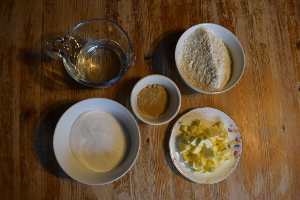 Eliza’s Ginger Cakes are more like what we’d call biscuits – thin and crunchy rather than spongy. We’ve converted the original quantities into metric measurements, and added in what worked for us in terms of water and baking temperature to make it easy for you to try the recipe. Halving the quantities still give you plenty of biscuits (30+). Please bear in mind that Eliza wouldn’t have had terribly accurate scales, so don’t worry too much about precise weights! If you have any food allergies, please adapt the recipe accordingly. 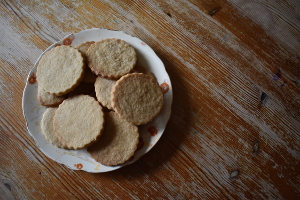 Once you’ve baked your biscuits, do find someone to share them with (of course, in your bubble or socially distanced please 🙂 ) And let us know how you got on – share a photo on our Facebook page or via Twitter and use the hashtag #FunPalaces.

Do you have a book at home where you store favourite recipes? We’d love to see it! We’ll be sharing ours too on our social media.

Have you got a great family recipe you could share with us or with friends?

Now get yourself a cup of tea and sit back and relax with this fascinating article written specially for us and our Fun Palace by Hazel Riggall, a member of the Sutton Coldfield Local History Research Group.

Ginger and history of gingerbread 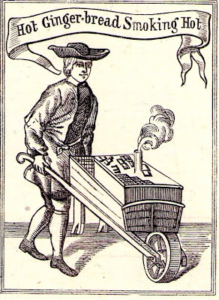 Ginger, a rhizome derived from a Sanskrit word meaning ‘horn shaped’, is thought to originate from SE Asia but also grows in India, Jamaica and Nigeria. The Chinese were using ginger in the 6th century B.C., and Arab traders bought it to the Mediterranean sometime before the 1st century A.D. Highly prized by the Roman Empire for its medicinal qualities rather than in cooking, it was later used from Anglo Saxon times for both culinary and medicinal purposes and became as commonplace as pepper.

Gingerbreads in the late medieval period were made from honey and breadcrumbs sometimes coloured with saffron or powdered sandalwood with cinnamon and pepper added for flavour.

The first mention of ‘gingerbread men’ in England may have been referring to a feast held by Queen Elizabeth 1, where images of some important dignitaries were made and presented. There are records of ‘gingerbread husbands’, a medieval and early modern pastime in village life among young women, each of whom would create and offer the gingerbread to her chosen man.

The first documented trade in gingerbread in England dates to the 17th century, being sold in pharmacies, monasteries and town squares. Over a hundred years later, Market Drayton became famous for its gingerbread, with the first record dating back to 1793.

Gingerbread may refer to a cake or type of biscuit and so fits with the Duncomb recipe for ‘ginger cake’ which is really a biscuit.

The selling of gingerbread at fairs as a traditional confection was linked with being a token of affection to sweethearts or as a treat for children. The gingerbread was often cut into shapes and sometimes gilded or stamped. It is mentioned in Ben Jonson’s play ‘Bartholomew Fair, ‘first performed in 1615. Ginger, a hot spice had associations with aphrodisiacs, women’s health and even for tempting consumers into adultery. The lines spoken to and by Joan Trash, the gingerbread seller in the play, have connotations associated with witchcraft and superstition.

Bartholomew Fairs were held every August, all around the country as well as Smithfield Market in London, to celebrate the patron saint of tanners. It was a time for raucous, sometimes criminal behaviour, fights and where ‘ladies of the night’ frequented.

Gingerbread is a topic in Dickens novel, ‘David Copperfield’ where a Mr Dick visited him at school. Mr Dick has what we would now call a learning disability and is looked after by David’s aunt, Miss Betsey in her cottage and thus saved from the alternative of an asylum. To quote, ‘Mr Dick was rather partial to gingerbread. To render his visits the more agreeable, my aunt had instructed me to open a credit for him at a cake shop which was hampered with the stipulation that he should not be served with more than one shilling’s worth in the course of any one day ‘ A generous enough amount I would have thought.

The closest recipe I have found to the Duncomb ginger cake recipe is the Ashbourne gingerbread which dates back to at least the 1820’s and originally did not contain egg. Grantham gingerbread first referenced in a 17th century diary is similar but includes egg and self-raising flour. Many regional variations of gingerbread exist, but commonly they also include molasses(treacle) and may contain oatmeal, such as the Orkney and Grasmere variants and my favourite, a secret family recipe for Yorkshire Parkin.

If this taste of the past has piqued your interest about local history do explore Sutton’s Sutton Coldfield Local History Research Group’s briliant website: https://sclhrg.org.uk/

FOLIO Sutton Coldfield is run entirely by volunteers. If you'd like to make a secure donation via PayPal please click here:

Book your places at FOLIO events:

(Not all events require booking, and nearly all are free, but some of our events have limited capacity and for those we operate a booking system)

Keep up to date with FOLIO

Please confirm you’d like to hear from FOLIO Sutton Coldfield via email by clicking the email box:

You can unsubscribe at any time by clicking the link in the footer of our emails.

We use Mailchimp as our marketing platform. By clicking below to subscribe, you acknowledge that your information will be transferred to Mailchimp for processing. Learn more about Mailchimp’s privacy practices here.